Your Symphony needs you more than ever! Shop at smile.amazon.com and choose the MSO as your charity!

The Monmouth Symphony works with many talented musicians for the guest solo artists featured in their concert performances. Please find biographies of upcoming guest musicians below. 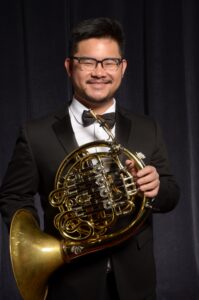 Hornist Evan Young holds a Bachelor’s in Music Education from Rutgers University - Mason Gross School of the Arts and a Master's in Horn Performance from Ithaca College. His principal teachers are Dr. Douglas Lundeen, Alexander Shuhan and Thomas Jöstlein. He is the Hornist for the Woodwind Quintet, Quinception and is also a member of the Eastern Wind Symphony and Sinfonietta Nova.  Evan is a well-respected and in demand freelancer in the tri-state area.

In 2019, he recorded Anthony Louis Scarmolin's Horn Sonata, which can be heard on You Tube:
https://www.youtube.com/results?search_query=scarmolin
+a+battle+with+destiny+evan+young

Evan is an elementary band director in Marlboro, NJ and since coming to Marlboro, has grown the band program with the addition of horn, oboe, and euphonium students.

The Strauss Horn Concerto Number 1 that Evan is performing is this year’s required solo for All-State High School Band auditions.  He hopes his performance will be an inspiration to not only the students who will be auditioning for the All-State bands, but for horn players of all levels. 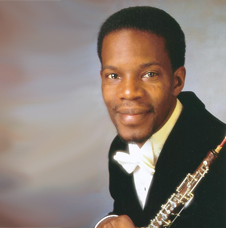 Oscar Petty was born in Newark, New Jersey and has studied at the Mannes College of Music. Dr. Petty earned a Bachelor of Music Education at Montclair State University and a Master of Music and Doctor of Musical Arts from Rutgers University Mason Gross School for the Arts. His teachers have included Stephen Adelstein, Leonard Arner, Marsha Heller, Bert Lucarelli, Richard Killmer and Matt Sullivan. Dr. Petty is a Yamaha Artist and gives master classes throughout the United States.

Hailed by the press as a "brilliant and captivating oboist," Dr. Petty has served as Principal Oboist of the Rome Festival Orchestra and has toured Germany, France, Switzerland, Austria and Canada. He was one of only four finalists to be awarded an Orchestral Performance Fellowship to the first Los Angeles Philharmonic Institute, where Leonard Bernstein described his playing as "a gorgeous oboe sound."

He has performed at the New Jersey Mozart Festival, Alice Tully Hall at Lincoln Center, Merkin Concert Hall and Carnegie Hall. Dr. Petty was awarded a fellowship to the American Conservatory of Music at Fontainebleau, France. He has performed in master classes at the Bach Aria Institute at New York University, American Oboist Conference at the Cincinnati College-Conservatory of Music and the Aspen Music Festival. His chamber music performances have included the Muir and Essex String Quartets, and he has performed under such notable conductors as Leonard Slatkin, Christopher Hogwood, Daniel Lewis and Herbert Blomstedt. Dr. Petty has also served as Principal Oboe for the Staten Island Symphony, Virtuosi de Camera, the Bergen Philharmonic and the Westfield Symphony and as Assistant Principal Oboe for the Cathedral Symphony at Sacred Heart Basilica, under Thomas Michalak.

He has premiered five new works for oboe by legendary composer Mario Lombardo.

Dr. Petty made his debut as a soloist at the world premiere of the Concerto for Oboe and Orchestra by Mario Lombardo with the Orchestra of St. Peter by the Sea, under the direction of Alphonse Stephenson. Dr. Petty has performed on WQXR classical radio and premiered the Rhapsody for Oboe and Orchestra by Mario Lombardo with the Monmouth Symphony, under the direction of Roy Gussman. His performances have included the International Double Reed Society Conferences at Arizona State University, University of Wisconsin, University of North Carolina at Greensboro and New York University. He has performed as a soloist with the Philharmonic of Southern New Jersey, Sioux City Symphony in Iowa and recorded Music for Oboe and Orchestra with the Billings Symphony, under the direction of Uri Barnea. He has performed on multiple recordings with the Rutgers University Wind Ensemble and has recorded the music of Lombardo, Haydn, Ulysses Kay and Hanson. Dr. Petty has performed at the New Jersey Performing Arts Center in Newark, New Jersey and has presented a clinic at the Midwest Clinic in Chicago, Illinois. Dr. Petty is Director of Bands and Orchestra at the Cicely Tyson High School of Performing and Fine Arts in East Orange, New Jersey and serves as a clinician and adjudicator for World Strides Music Festivals. 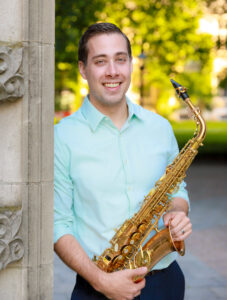 With reviews praising his “liquid tone”, New Jersey-based saxophonist Dr. Jordan P. Smith has concertized extensively throughout the United States and internationally in Germany, Austria, the Czech Republic, and Greece as a soloist, conductor, and chamber musician. He completed his D.M.A. at Mason Gross School of the Arts, Rutgers University, where he studied with Dr. Paul Cohen. He holds an M.M. degree in Saxophone Performance from Manhattan School of Music and a B.M. in Music Education from The College of New Jersey, where he studied with Kathleen Mitchell. He has completed additional studies with Dr. John Sampen, Ken Radnofsky, Jean-Michel Goury, and the Rascher Saxophone Quartet.

As a concerto soloist and orchestral member, he has performed with the New World Symphony, Chamber Orchestra of Philadelphia, Bravura Philharmonic, Sifodec Orchestra, and numerous other ensembles under acclaimed conductors such as Michael Tilson Thomas, Robert Spano, H. Robert Reynolds, and Eugene Corporon. During the past decade, Dr. Smith’s performances have led him to Haydn Hall in Eisenstadt, Austria, Betlémská kaple in Prague, Carnegie Hall's Stern Auditorium, Lincoln Center's Bruno Walter Auditorium, the Metropolitan Museum of Art, Knight Concert Hall at the Adrienne Arsht Center in Miami, the Tenri Cultural Institute, Symphony Space in NYC, Yamaha Concert Hall in New York City, and Eisenhower Hall at West Point.  Performing as a chamber musician originally based in New York City and a strong proponent of new music, Dr. Smith has premiered over 30 works by composers from around the world.  He is also a member of the Manhattan Saxophone Quartet (MSQ).

As a conductor, Dr. Smith has been the director for over a decade of the renowned Saxophone Program of Youth Orchestra of Central Jersey, the only program of its kind in the United States. The saxophone program performed at Carnegie Mellon University in 2019, toured Austria and the Czech Republic in 2014, and Germany in 2017.  Dr. Smith is also an Adjunct Professor at Saint Peter's University in Jersey City, NJ where he teaches music history and taught previously at Georgian Court University and William Paterson University.  He maintains a large private teaching studio in Hightstown, NJ with students regularly winning all-state band positions and regional competitions.  He can be heard on Ravello, Blue Griffin, and Carrier Records and has been published for articles in TEMPO Magazine, the Saxophone Symposium, and the Saxophone Journal.  Dr. Smith thanks God for directing him and his family for supporting him.  www.jordanpsmith.com

It was a wonderful performance and a great learning experience for our children.

Congrats to the Monmouth Symphony Orchestra on a successful Valentine’s Day Concert!

Congratulations to a fabulous performance by the Monmouth Symphony!

This error message is only visible to WordPress admins

Please go to the Instagram Feed settings page to create a feed.